Current conditions as of 27 Nov 05:49 am CST
Today
Cloudy through mid morning, then gradual clearing, with a high near 46. Northwest wind around 10 mph becoming south in the afternoon.
Tonight
Mostly clear, with a low around 21. Southwest wind 10 to 15 mph.
Monday
Mostly sunny, with a high near 58. Southwest wind 5 to 15 mph becoming east in the afternoon.
Weather forecast provided by weather.gov.
Search
Main Navigation Your session will expire in 0 minutes.

Photo of the original school building in St. Francis. Believed to have been built near the site of the existing Grade School Building. 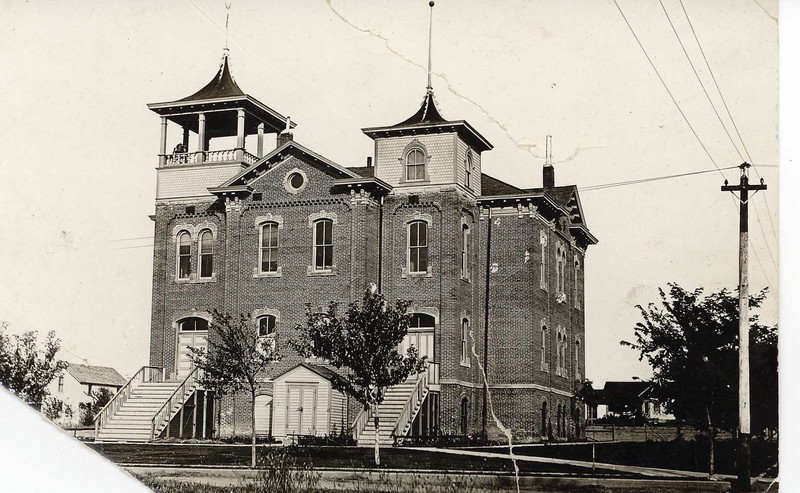 Photo of the original school building in St. Francis. Believed to have been built near the site of the existing Grade School Building.

The accompanying photo of the old St. Francis Elementary School, which was erected in the late 1890's, probably 1898, was the birthplace of the first high school in Cheyenne County. It was a beautiful, artistic brick structure which complemented the above event. The building faced west toward Denison Street and was located in the area approximately west of the existing elementary building.

The high school began in 1901 and offered a two-year program. It was established largely through the efforts of C.M. Kincaid, a graduate of Nebraska University, who was serving as principal of the elementary school. He was a school administrator with vision. In addition to promoting the first high school, he was a major influence in the establishment of a four-year county high school two years later. Instructors of the first high school were C. M. Kincaid, Florence Ward, Pearl Scanlan, and Lura Northrup. Members of the 1903 graduating class were Laura Armstrong, Ina Graves, Nolia Jaqua, Claude Tressel, and Maude Denison.

In early 1903, the state passed an act for the creation of county high schools for those counties qualifying under the act. The provisions of the act were met by Cheyenne County, and in July of 1903 the commissioners gave approval for the establishment of the Cheyenne County High School in St. Francis.  The first classes began in September, 1903.  Faculty members for the first year were E.E. Colyer, Principal, Pearl Ross, Hattie Waters, and Pearl Scanlan. The first graduates of the County High School in 1907 were Charles Benkelman, Ben Harrison, Tessie Lawless, May Watt, Hazel Halley, Effie Walin, and Irene Moore. 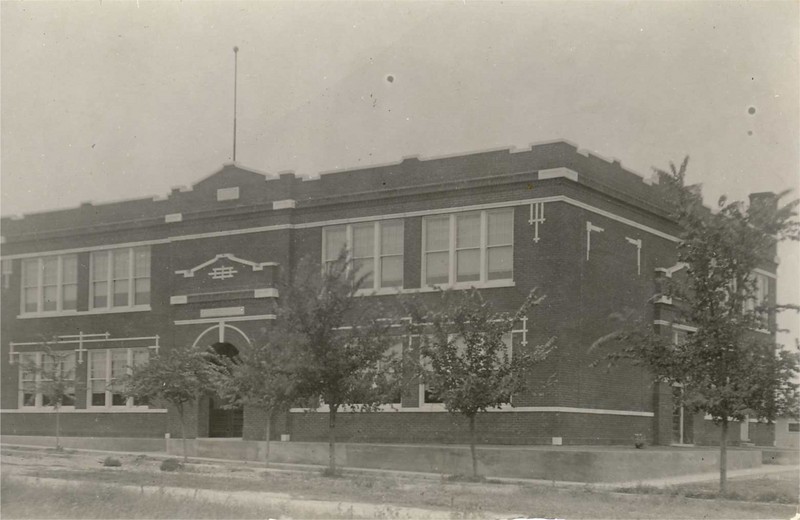 Early photo of the St. Francis Grade School Building.
In 1917, a new high school was built at the present site of the existing high school on College Street. Classes were moved to the new building during the 1917-1918 school term. The first faculty members to teach in the new building were Leigh Dowling, Principal, Hazel White, Anna Daniels, and Josephine Jaqua. Robert Cram, a former teacher in the county high school, was serving as county superintendent.

The course of study for the students during most of the years of the County High School was divided into three parts: a college preparatory program, normal training for those planning to teach, and a general program for those not wishing to specialize in a particular field.

The last organizational change affecting the high school came under the school unification act implemented in 1965-66. This act provided that all individual public school districts of sufficient enrollment and adequate facilities were to provide instruction of the students through the first twelve grades. The districts of the high school, city elementary school, and seven rural schools were combined into a unified district and designated as the St. Francis Community Schools, Unified School District 297. The boundaries of the district were substantially the same as those of the discontinued community high school district. The unified district's enrollment for the first term, 1966-1967, was approximately 740 students.

Some remnants of the 1917 high school structure (red brick) are still visible; but over the course of over ninety years, several additions (and numerous internal renovations) have been made. A summary of the additions, and the years they were made, follows: 1932, classrooms and gymnasium; 1934, classrooms and an auditorium; 1952, an addition to the vocational agriculture department; 1956, a music department addition; 1965, a bond issue for an extensive new addition--including gymnasium, wrestling practice room, superintendent's office, cafeteria kitchen, and remodeling of the old gymnasium into a school cafeteria on the ground floor and jr. high classrooms on the second floor; 1974, new shops and classrooms for the vocational agriculture and industrial arts departments; 1976, a new school bus garage; 1992, a new athletic addition--including locker rooms for both home teams and visiting teams, a wrestling practice room, a weightlifting area, and a physical education/health classroom; and 2006, a new school bus parking garage.

Photo of early St. Francis. The school building is the large building near the center of the photo

Photo of early St. Francis. The school building is the large building near the center of the photo
The high school began with a limited but appropriate curriculum and with a small but capable staff. It has maintained a strong curriculum throughout its history. In the mid 1930's, the high school was accredited by the North Central Association of Colleges and Secondary Schools, a mark of academic distinction. During the late 1950's to early 1970's, as the Space Age evolved, the curriculum expanded extensively; and as a result the school was accredited as a Comprehensive High School, the highest accreditation for Kansas high schools.

In 1992, the Kansas State Department of Education initiated the Quality Performance Accreditation (QPA) system.  Under QPA, all public schools were required to develop a School-Improvement Plan with emphasis on research-based instructional strategies, data-driven modifications, and continually better student outcomes (based on "triangulated data").  During the 1990s, St. Francis administrators, teachers, and other community members invested a huge amount of time and effort and paperwork documentation in the QPA process; and the St. Francis Schools emerged from each accreditation cycle with full accreditation and with high commendations from the visiting state evaluation teams.

When schools began to form athletic leagues, St. Francis became a member of the Northwest Kansas League (NWKL) and has remained a member of that league throughout its existence.  The St. Francis green-and-gold Indians have competed well against the other members of the NWKL--Atwood, Colby, Goodland, Hoxie, Oakley, Oberlin, and Quinter (and, in some past years, Norton and Scott City).  For St. Francis, girls' athletics have included volleyball, basketball, and track; and boys' athletics have included football, wrestling, basketball, and track.  More details about  St. Francis team and individual records in these sports can be reviewed on the school website at http://www.usd297.org.  In 2010, Colby and Goodland left the NWKL largely because of declining enrollments in the other six schools in the league; and plans are underway for Dighton, Leoti, Sharon Springs, and Tribune to join the NWKL, beginning in the 2012-2013 school year.

This article for the most part has been one of legislative acts, statistics, and buildings. To the writer's regret, the humanistic aspects--staff, students, curriculum, and activities--during the many years of high school history have been only slightly touched upon. To do justice to each facet of the high school and its programs would require an article of much greater length.

It is hoped that the statistics presented are accurate, or as much so as possible.  When we reach back this many years, we find that records are sometimes missing, sometimes incomplete or vague, and that memories fade.  The writer would like to express his appreciation to the many individuals who have provided bits and pieces of information for the article.  Without their help, it would have been most difficult.  The writer would also thank the Register of Deeds, the High School, the Historical Society, and the High School Alumni Association for access to their records and research.